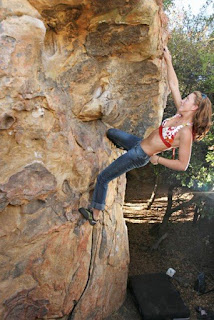 Alright everyone! Cute Climber Girl of the Week is BACK!!! Get psyched for la femmes that la crush! First up for the reunion tour is a special new friend to P&C who I spotted on complainingfrommycomfyarm- chair.com. After a month waiting for her response I found out she’s the only girl that can keep D. Woods’ attention and she warned me that if I made her look like an idiot she’d send him to crimp me to death. I think I believe her. Anyway, click through for interview and more photos!

Name: Laura Jade Griffiths
Age: 19
Current location: Seems to be ever changing, currently, the basement of Daniel’s soon to be Los Angeles then Palo Alto
Hometown: Born in London, England, but I’ve lived in 18 houses in 19 years so it gets a bit confusing! 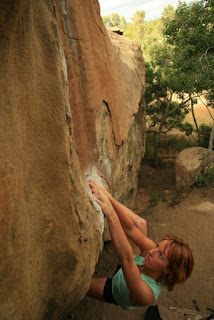 Sharp cheddar cheese (from Costco!!!)
Wow, simple.
…and cheap but sooo good.
What were you doing in South Africa so recently?
Climbing all the boulders, playing with baboons and hiding from snakes. actually reverse that order
How long were you there?
Seven weeks. Well, five weeks there loving life and two drowning in rain and sulking.
There could be worse places to be rained on I suppose.
No its the worst! It is without a doubt the best bouldering in the world so sitting there in the rain is like being in a candy store on a diet!
Bummer! So you’re a boulderer then. Don’t do the routes too much?
I started out route climbing once upon a time, did all the junior comps then discovered how much easier bouldering was, and my lazy side took over! Plus lead climbing outside terrifies me! I know that’s not cool to say or whatever, but it does. It’s weird because I like highballs and went bungee jumping, but something about not knowing how far you fall freaks me out.
So Longmont…Woods family’s basement…heading up to the park much?
Yeah I love the park. I’ve spent some time there for the last three summers 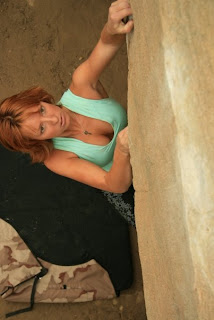 Any big sends out there recently?
I’m keeping the sends on the DL right now. When I do and document something that defies any skepticism I may tell people, but for right now I think people get too critical and competitive. It’s more fun to just climb for me and the people closest to me and not risk other people taking away from my happiness with any negativity...yeah! Is Daniel really a cool dude or is there something undeniably sweet and mushy gushy he’s done for you recently we can all bring up when we see him next?
Haha Daniel is amazing. Hmm…Yesterday on the hike up to Evans he picked all the different flowers on the hike and when we got to the Dali Wall he made me a bouquet. And he makes me breakfast in bed!
Breakfast in bed?! You must be a good girlfriend.
The best. He still hasn’t given me his super powers, though. I’m holding out for those.
Let me know when you get them and then teach me how. What else do you do aside from climb?
I surf, dance, take photos and try to live in denial about the fact I start school again in September! Oh, and I make sure Daniel doesn’t get lost or lose things.
School! What are you majoring in?
Probably international relations geared towards photojournalism, but in my mind I’m hoping I get do that by taking classes in underwater basket weaving or finger painting 101!
Have you been watching the Olympics?
Yeah we have been watching every night when get back from climbing. 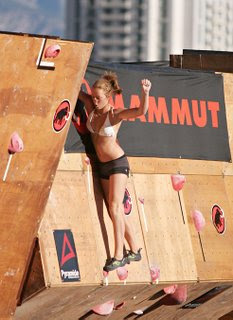 What has been your favorite thing to watch so far?
Daniel and I like to watch the gymnastics. He just likes it when they fall though! the slow motion replay like when that guy slipped of the rings last night. I like to watch the girls gymnastics, they are so teeny tiny and so strong! I could never do that. Have you read that book little girls in pretty boxes? They start training at age 3 or 4. I need rest days and junk food!
Who is the most inspiring female climber you know?
Robyn Erbesfield by far. Also Andrea Szekely. Robyn is so mentally strong and she is still the most internationally successful female American climber,but from climbing with her when I was younger you see that although she is obviously really physically strong she has pushed herself even further through mental strength and confidence. And Andrea is s good friend of mine, she is so dedicated, and somehow manages to balance so many things and excel in them all.
What was the last good book you read?
The Kite Runner. Someone brought it to South Africa.
I’ve heard that’s a good one.
But it’s terrible, since I’ve been out of school this last year I have been reading so much trashy chick lit. This was the exception recently. Yeah, it’s amazing
Any last words?
Live in the moment and go to the Rocklands! Oh and I want to tell the best joke ever, though it is super old. Why was six afraid of seven?
…
Because 7 8 9! 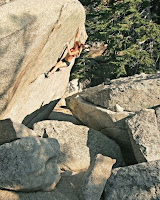 Lots of these pictures are by Susanica Tam. You should really pay her a visit. She’s totally kick ass.