No matter where you climb you can bet you’ll run into these people at some point in your climbing career. They suck. All of them. It’s true and I hate to admit that. If you don’t run into one of these people then you can bet you are the one you aren’t running into. And if you’re a girl don’t assume you’re the token hot girl either. There’s usually only one of you so you’re probably the Annoying Girl. Just check yourself.

Terribly boring this one. You don’t really want to climb with them. They don’t like cleaning draws off routes because the rope is touching part of the rock that “might be sharp enough to cut it.” They suck basically because you can’t have any fun climbing with them. They won’t take falls and if they actually manage to get to the top of a rock climb, you’ll end up climbing it again just to clean it. There’s a line between safe and neurotic and they are on the side that doesn’t make me happy.
Attributes: Nervous look, ropes over 10mm, constant verbal internal dialogue about how nervous they are, excuses…
How to handle: Bring you’re own partner, if they ask for a belay tell them you just dropped your grigri off the last climb you just did. Trust me, they’ll ask someone else.

Hardly needs a description. I used to be one, you used to be one. They are terrible at climbing and more terrible at being safe. The ones that are safe are annoying. They all know how to use a bail biner and that’s about all they do well.
Attributes: ATC’s for cragging, flat-lasted shoes on overhung terrain, aggressive shoes on slabs, daisy chains.
How to Handle: They travel in packs and much like the Worrier, they are to be avoided. Some kind hearted people will take a gumby under their wing and teach them to be less like an idiot and more like a member of awesometown, but don’t feel obligated. They’ll figure it out eventually just like you did. These bags of douche are everywhere. They are usually a local and they know everything (hence the name). They know everything about every route. If they havn’t done it  you can be for certain they know someone who has and has had a very detailed conversation about it. They are obnoxious. to the maximum.
Attributes: They are always talking. If they don’t know you they will get to know you and find out why you’re climbing what you’re climbing and what they can tell you about it. This is all they do. I don’t even think they climb.
How to handle: They approach you most of the time. I you can spot one before they do this climb at a different area than them to avoid. They are really good at blowing your onsight with their vast knowledge and big fat ugly mouths. You could be diplomatic and humor them but my favorite method is “hey dicknose, shut the fuck up. Speak only when spoken to.”

There is always one as I said above. There are rarely two, and never three. It just doesn’t happen. They are super hot. Rarely do they climb very hard, but we all know it doesn’t matter. 5.6-5.14, we guys are just glad they exist. Occasionally however rarely they will travel in groups. THIS is awesome.
Attributes: Tiny clothes, hot bod, group of drooling dudes trying to climb on the routes adjacent even if they’re the chossiest 5.9+x routes in the area.
How to handle: Your best bet is just give up homie they usually have a boyfriend and they are usually with them. Sometimes though your climbing the adjacent route tactic will actually work, but I wouldn’t hold your breath. If they’re in a group don’t even try. They will eat you alive. I’ve seen it happen and it’s ugly.

Just like the hot girl there are only a few of them ususally at each crag. They are just happy to be a rock climber. They think it’s the best thing on earth and they aren’t afraid to tell you about it. They have stickers on their nalgenes and Prana tank tops and one time they saw a Jason Kehl slideshow. They’ve climbed 5.10 of course but they know that’s not that great. They are just getting into leading and really want someone to teach them.
Attributes: Shiny draws they’ve never used, climbing specific clothing, an open spewing mouth full of climbing bullshit, shrill voice, the guys that gave up on the Token Hottie climbing around.
How to handle: Just don’t talk to her. They’re mostly A.D.D. If you show no interest in them they’ll just move onto the next boy or they’ll just keep talking while you continue to not listen.

The Tech Freak (AKA THE GEAR DIVA)

They love gear and they want to tell you all about it. Whether it’s their new set of Master Cams, new R1 or the new dry coating a rope might have, they have it and they want to tell you about it. They especially want you to know the materials. It’s amazing they even know this stuff.
Attributes: Brand new shiny gear, confidence in their brand new shiny gear, no dirt on their clothes, usually leading something they’ve led 1000 times.
How to handle: Ask them about their gear. It’s usually entertaining and on the whole their new stuff doesn’t help them climb any harder, but i’m always interested to see their logic. Humor them for a while then ignore them.

These guys. They are great. They are usually the ones that suffer the wrath of the Humble Pie, but when there isn’t one of those around they’re just annoying. They talk a lot about what they’ve done. They want to be the center of attention and they’ll talk just loud enough to get you to notice. Usually These are the one’s trying to talk with the Token Hottie, but we all know it’d be better for everyone if they’d just hit up the Annoying Girl. They’ve done the route you’re doing. They know the beta, and “bro if you want it he’ll spray you down.” He knows how hard the high step is going for the pocket on the 13a/b. He hasn’t sent yet but he soon will.
Attributes: Beta Spew, wears harness EVERYWHERE, rope always below a hard project where he constantly will fall at the crux or conveniently before a spooky section
How to Handle: The best way to treat Loud and Proud is to waltz right up to his project and tie in. While you’re putting on your shoes he’ll tell you he’s been working on it for x long and has the beta if you want it. Just say “no.” Then hike it. If you don’t hike it, give up and take his beta and validate his existence just a little more and next time find a Loud and Proud who’s project you can actually send jackass. 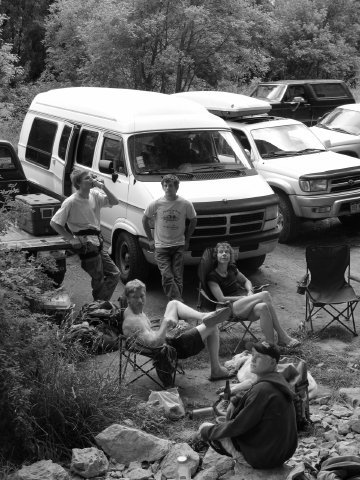 These guys are a lot like the Loud and Proud only they are a bit more reserved about their spray. They think they are being humble but they’re not. You find them a lot in Rifle actually. They love it when you mention a route because of course they’ve done it. They are constant one-uppers, but you have you engage them. They won’t just spray unsolicited which makes them like a breed of passive aggressive shit sticks.
Attributes: nothing, they are like wolves in sheep’s clothing, secret beta ninjas that lay in wait. Sneaky fucks. They drink beer in the Arsenal parking lot usually.
How to handle: You can’t! They’re sneaky fucks! You just have to deal with it!

The Girlfriend That Doesn’t Climb

Dejected and alone, they just sit with their head down occasionally looking up at the route their boyfriend is doing. This is all they do, and nothing else. One day a weekend she gets dragged out to “spend time” with her boyfriend while he climbs and she looks bored.
Attributes: Often sitting on a log reading Twilight or trashy magazine. Also identified by getting a kiss from her boyfriend every time he returns to the ground from a route.
How to Handle: Dudes. DON’T EVEN TRY. They are sick enough from climbing bullshit anyway. They aren’t impressed by you. They don’t care. They’ve seen enough ripped guys climbing around her that she will certainly not be phased when you take your shirt off and display your sculpted pecs. She loves her man well enough to come watch him climb for 8 hours a day you can bet she’s not there to look around. Get over it. This homie will make you feel like shit. He/she does it effortlessly without words. They walk up to whatever you’re doing, quietly ask for a turn on the route/boulder then completely piss all over it. Then they don’t say anything and walk away. If you stop them and ask them how it was, or if they’d done it before they always say that was onsight. Because it was. They will steal your girlfriend and crush your spirit and that’s just good for everyone sometimes because she was a slut anyway.
Attributes: On the sharp end of the rope walking everything they touch. Silent and very kind. Not you or me.
How to handle: Sit back and take a bite of Humble Pie. It’s about all you can do. But if you just can’t swallow that pride. Tell them there’s a big line on your project and leave before they send it and make you feel completely worthless.

They climb in a much better style than you and they are not afraid to say it. If you’re climbing a sport route that has a small crack near the 4th bolt you better believe you’ll hear about how it shouldn’t be there and this route could at least be mixed. You know though when they climb it they’ll be clipping the bolt anwyay. They suck, they aren’t fun to drink with and they are serious about that whole “mountains being their church” thing. Often they will be alpinists. They hate sport climbing and bouldering but at least “bouldering is pure.” In the end they don’t realize that all they do is climb rocks.
Attributes: Usually whining or pining about something or telling you about their epic adventure on Mt. Baker.
How to handle: Punch them straight in the mouth as soon as they open it with another opinionated piece of elitist bullshit. These are the people visiting your crag from out of town. They’ve never been here before and they want the “beta.” What routes are must-do? Can I borrow your guidebook? Have you climbed this one? can I bother you with even more stupid questions and ruin your day of solitude climbing with your friends?
Attributes: A look about them that annoys you just seeing it, constantly asking questions, looking in your guidebook
How to handle: My favorite is to send them up the worst, hard to protect 5.9+R in the area and listen to what they tell me about it afterward.