Canon City, America, home to Ortega’s (best New Mexican Food outside New Mexico), Colorado’s largest Penitentiary (known as the Alcatraz of the Rockies), and Shelf Road rock climbing!  Probably Colorado’s best, most expansive face climbing area, Shelf Road hosts hundreds and hundreds of routes with a little something for everyone.  Experience the Vertical Beach this winter, jump for more info on Shelf…

END_OF_DOCUMENT_TOKEN_TO_BE_REPLACED 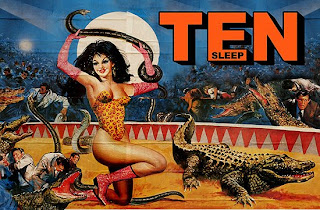 WARNING: with blue and grey streaked walls so steep and pockets so small you may spontaneously blurt out phrases in French. People have been shot for much less in this part of Wyoming. For the goodies on TS hit the jump now!

END_OF_DOCUMENT_TOKEN_TO_BE_REPLACED

I start out with a verbal sigh because Eldorado Canyon or Eldo, as its affectionately known, is a major Destination Crag that shouldn’t be penned with fleeting thoughts. I will probably fail one hundred percent, but here goes.

The canyon, characters, bolts or lack there of, pins, flakes, towers, and history make Eldo one of the most famous rock climbing areas in the U S of A. This sandstone wonder-canyon can make men cry, women swoon, and send Euros packing. Located just south of the People’s Republic of Boulder, Eldo was the forefront of rock climbing for years and has since seen a resurgence in popularity among young, talented, and bold tradsters (aka, Eric Decaria, Matt Segal, Matt Wilder, Justen Sjong, or your basic front range freak). Climbing in Eldo can evoke sappy nostalgic emotions to climbing history buffs. Once the playground of Layton Kor, Larry Dalke, Pat Ament, Jim Ericson, Roger Briggs, and a host of other old school pimpers and crimpers, Eldo is a virtual rock climbing Smithsonian. Utilizing pins pounded into the conglomerate sandstone, the typical rock climber is clipping artifacts from days gone by. Nostalgic, but frightening!

While early generations stuck mostly to the obvious lines on the Redgarden Wall, Bastille, and the Wind tower, latter generations sought out harder lines at Rincon, West Ridge and then attacked the old aid routes as free climbing techniques developed. When sport climbing kicked off in America Eldo proclaimed drilling bolts as an evil act and banned their use in the park. Therefore, the observant Eldoradoer will recognize a lack of sport routes in the 5.13 and harder category. Save of course the classics which slipped in before the ban. Hard classic sport routes such as Rainbow Wall, The Web, and Desdichado do exist, however, Eldo is staunchly traditional and rightly so. The traditional lines that have been established in this canyon are proud. You may recognize a few of these names: The Yellow Spur, Bastille Crack, The Naked Edge, Jules Verne, Doub Griffith, blah blah, the list of classics is endless, well not really endless, but it’s really long.

With over 500 routes to her name, Eldo has a little something for everyone. Think you’re solid at a certain grade? Step up to the plate in Eldo and then we’ll talk. Face climbing with RP’s and micro-cams can humiliate and humble the average joe. Oh yeah, don’t forget two big brass balls when you rack up, chances are they will come in handy on a large percentage of Eldo routes. Multi-pitch madness, casual cragging, bouldering, it’s all wrapped up in a tight little canyon called Eldo, here on the front range.

Down to the nitty gritty. The must do’s for Eldo adventure seekers: To preface this post, we at P&C will be profiling crags we think are worthwhile for whatever reason. Even though we tout ourselves as sport climbing pansies, we will bring you the best areas we know of for all disciplines of this climbing lifestyle. However, the crag I am featuring in this segment is a sport climbing area, so blow me.

To me crags are broken up in categories that define something like this: 1) Destination areas, places I would basically suffer for on long caffeine and nicotine induced trips trapped in a motor vehicle, train compartment, or aircraft. These places tend to hold significant historical value and high quality lines to boot. Examples, Hueco Tanks, Font, Smith Rocks, The Red, Indian Creek, Frankenjura, Ceuse, etc. 2) The Weekend Excursion, similar to a destination area, but within 4 or 5 automobile hours. Maybe even a new area that seems to be a “hot spot” or a lesser known crag that could be a dark horse personal favorite. Examples for us here in the Front Range, Wild Iris, Black Hills, Puoux, The Poudre, Shelf. 3) The Local Crag, typically these are your go after work, I can’t get away this weekend, last ditch effort, training crags. They could be good or they could be bad, but at least it’s rock you can climb on and find some marginal benefit to its existence. So, with that, this installment of Crag Exposure speaks of the latter crag category mentioned, at least for me. Clear Creek Canyon sits just outside Golden, Colorado and slivers up Highway 6 headed for mountains, casinos, and of course, Rock Climbing. At first glance the rock seems friable and chossy, which, it may be, but diamonds in the rough do co-exist with these overbolted brick dumps. For the brief boring historical point, CCC soared in popularity in the late 80’s when cocaine, fast cars, and lycra played an integral role in every climbers life. After the bolting ban at the staunchly traditional Eldorado Canyon became effective, CCC was the place that pimpers and crimpers united in a single front to overcome this evil sport climbing discrimination that plagued the Front Range. Names such as Kurt Smith, Alan Nelson, Richard Wright, and Ken Trout paved the way by scouring the roadside cliffs that now make up the CCC.

Today, climbers from all over the front range utilize this Gneiss canyon for weekend jaunts, after school specials, and post work workouts. What attracts me to CCC, besides living two minutes from the mouth of the canyon, is the variety of routes that it offers. Want super steep Rifle simulators? Done. Need to pull your Cobras on and suss out technical masterpieces with Francois Legrand style? No Problem. Salivating for Slopers? We got’em. CCC accommodates most every style, short, long, powerful, sustained, you name it, its there. Now, with a new guidebook published by Sharp End, authored by the elusive and reclusive Darren Mabe, even more people will be combing the crags of CCC. By the way, the book is as good as it gets, one of the best guides on the Front Range. The Must Do’s if you are cruising through and need to stop at CCC (all three or four star routes):