Here’s  little video Joe Kinder sent me the other day. It’s kind of a Gregory packs plug but whatever. Hate it or love it, underdogs on top. END_OF_DOCUMENT_TOKEN_TO_BE_REPLACED

I have no idea what this thing is or what it’s all about but someone sent a link to this video and I thought, “Well that’s the dang funniest thing I’ve seen today.” So I’m posting it here for you all to see. Could be worth checking out since it involves at least three of the following: poop, climbing, sex, campusing END_OF_DOCUMENT_TOKEN_TO_BE_REPLACED

Today is C-Note’s birthday. It is ALSO Whiskey Wednesday. C-Note is off in Boston some where doing some college grad school thing and it sucks to be that busy. That’s why you don’t see her that often on the site. BUT, she’s almost done. The end of the semester is almost complete and this summer should provide a wealth of C-note material for all you who enjoy the content from the only girl contributing on our site.

Raise your glasses tonight to the raddest chick we know.  Wish her well into the  hot summer and for completing another year of life.

Three year old climbs 5.13b at Smith? Washington Toddler topropes Evil Sister, 13b, in the Dihedral crag at Smith Rock. After working the route with her older brother, Brian, who is only Seven years old, Michelle Kranowski has cleanly toproped this short powerfest using “short people” beta. It took Michelle a total of 5 days and over 15 attempts to tidy up her hardest TR to date! She commented on her 8a.nu scorecard saying, “So psyched! Back in the game, jjjjjjjjjyyyyyyyyeeeeeeaaaaahhhhhh! To Bolt is NEXT!” END_OF_DOCUMENT_TOKEN_TO_BE_REPLACED

In a normal economy, dirtbag climbers tend to have pretty predictable kinds of jobs. They work construction, they serve coffee, they cut trees, they wash windows. Unfortunately, all of these sectors have been hit hard by the recession, forcing many climbers to go from “poor” to “fourth world country poor.” Fortunately, the P&C staff has been sifting through data and conducting countless hours of research to unearth job markets which are both still robust and cater towards the natural strengths of a climber.

Rumor has it that some of the boulder elite already capitalized on this a few years ago and honestly, I can’t think of a good reason not to do this. In fact, I think climbers are especially suited to the job: they have fit, toned bodies, abs to die for, are generally pretty tan, and are really really good at grunting and moaning five times louder than is necessary. The only hitch for a lot of you climbing dudes out there is that you have really small penises(why else would there be so much weenie waving on RC.com??). Fortunately, there is a cure.
END_OF_DOCUMENT_TOKEN_TO_BE_REPLACED

Bouldering in America is good, like, really good. Huge independent blocs dot the landscape in Bishop, mega-classic problems line up like an outdoor gym down in Hueco, Font-like Sandstone rabbit terds lurk in the deep south, and epic glass variation eliminate classics have been carved out of the Dakota sandstone in the one-horse town of Morrison, Colorado. END_OF_DOCUMENT_TOKEN_TO_BE_REPLACED 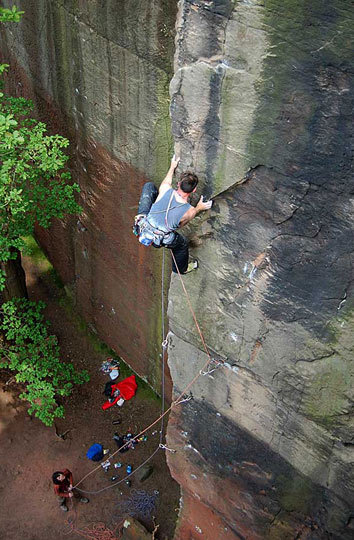 The Hollywood Guide to Climbing

END_OF_DOCUMENT_TOKEN_TO_BE_REPLACED

Name: Kathleen Cargill
Age: 24
Location: Oklahoma City, OK
If you could send any route in the next six months what route would it be?
Amazon Woman at Quartz. I have toproped it before, but I think it’s a classic route that is tons of fun with many different styles of climbing all in one route and I would love to snag the lead. END_OF_DOCUMENT_TOKEN_TO_BE_REPLACED